The Vikings called this important symbol (Ægishjálmr or Aegishjalmur) translated into modern Danish, it means "the awe-inspiring helmet" or "Ægir's helmet". king was angry and commanded silence.

- Start by seeing our selection of this beautiful piece of jewelry -

The name 'Aegishjalmur' itself comes from Ægir (which in the Viking Age meant sea), the god of Jotunheim, the land with the frost fighters and one of the nine kingdoms in Yggdrasil.

Eggs are the personification of the sea. His powers can be used for both good and evil, but are constantly dealing with the water and the sea. "Ægir's door" and "Ægir's jaws" were the tidal waves and eddy currents that engulfed ships at sea.

Eggs are often presented as an old man with a white beard. If you saw him on the surface of the sea, it was most often an ominous sign. He mostly came to the surface with the intention of dragging ships and men with him down to the bottom of the sea and he was therefore naturally feared by sailors. And it is perhaps this fear that the Vikings have planted in the symbol Ægir's helmet.

The first time we become acquainted with Ægir's helmet is in the poetic Edda. Here is described Fafner who is a deformed and mighty dragon whose blood is poisonous. The dragon jealously guards a large treasure, and is claimed to have invincible powers, which it got from Ægir's helmet. Fafner is eventually killed by the hero Sigurd Fafnersbane with the sword Gram. Then Sigurd steals Ægir's helmet from the dragon.

The verse reads as follows:
Ægirshjelm is honored
I carried in front of men of sons
In defense of my treasure
among all, I was strong alone
I thought to myself
I find no power that can match my own.

On the runestone that stands by Ramsund in Sweden from 1030, the völsunga saga is illustrated - where Sigurd pierces the dragon's heart.

In the older Edda it is referred to as a horror helmet, but it does not have the shape of a helmet at all. Rather, the symbol invokes the ultimate protection of the wearer of this symbol when it is inscribed on his / her forehead.

That Ægir's helmet is magical is confirmed by a magic formula written in the 17th century, which can be found in the Icelandic folktale collected by the great Jon Årnason. - The Magic Book: An Icelandic Grimoire. pp. 100

The form reads as follows:

Make a helmet of awe in lead,
press the lead sign between the eyebrows and number the formula:
I wear a helmet - between my edges!
Translated: I carry the helm of awe - between my eyebrows!
Thus the warrior will meet his enemies and be sure of victory.

According to old beliefs, the wearer of Ægir's helmet will not only have physical protection, but also spiritual and mental strength to conquer his own fears. Then it's time to create fear in the heart of enemies threatening the wearer of Ægir's helmet. It is therefore believed that the Vikings also painted Ægir's helmet on their shields and on their helmets to show their enemy that they were invincible and that no one could match them in battle.
As mentioned earlier, the Viking warriors would wear the symbol between the eyebrows, as well as a sign of strength in battle and the belief that it would give them victory.

It is believed that the power of Ægir's helmet was most effective when the symbol was inscribed (also on the inside of the helmet) with either blood or the wearer's saliva. 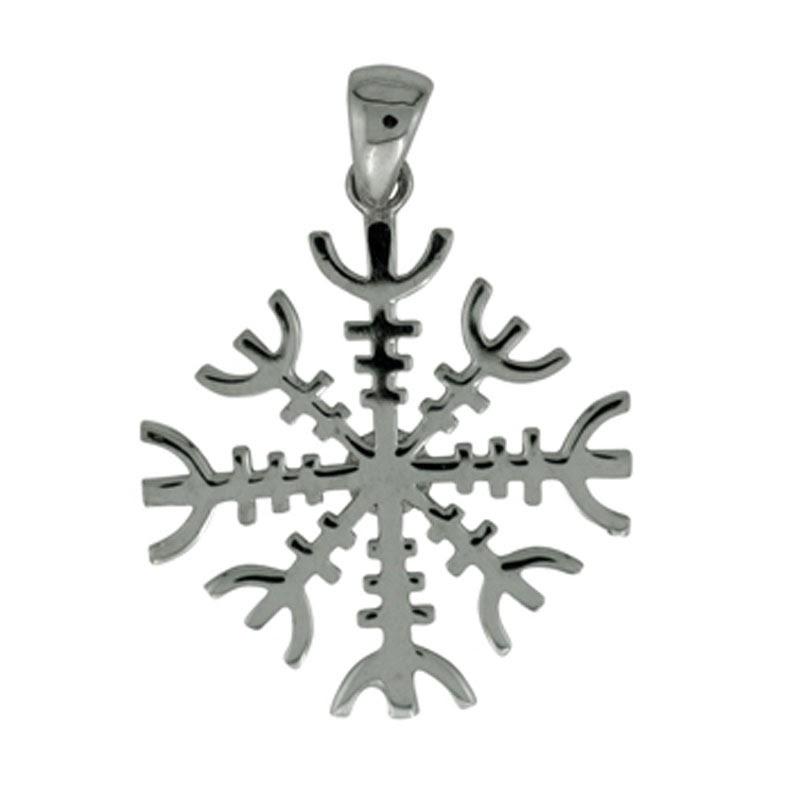 In our time, you can wear this jewelry and gain strength for everyday problems and protect yourself from evil people. And just like for the Vikings, it will give you physical protection and spiritual and mental strength to conquer your own fears.

It is a historical symbol, which is More Than A Jewel, it is a true Viking jewel with Old Nordic magic.